As many longtime Pittsburghers know, we learn to take advantage of days when the sky is actually blue and it isn’t raining. This is especially true during the winter when the constant dreariness and frigid temperatures can be somewhat oppressive. And so, I embarked on my street by street walk of Garfield on a beautiful and rare 50 degree day in mid-February. There wasn’t a cloud in the sky and walking up Garfield’s steeper slopes pushed me to remove my jacket on a number of occasions. The East End neighborhood is topographically and geographically diverse with streets that run west to east and hilly avenues that run south to north. And while sections of the northwestern part of Garfield are quite wooded, the remainder of the neighborhood is densely populated by solid brick single family homes and row homes  – with streets along the upper part of Garfield that give way to magnificent vistas of other neighborhoods that inhabit the East End down below.

About a quarter way through the grid like street patterns that comprise most of Garfield, I traversed a flight of city steps that connect Hillcrest and Rosetta Streets and made my way down N. Winebiddle until I came to Kinkaid Street. While heading eastward on Kinkaid, I ran into an approachable and soft-spoken Black woman named Alisha. She was waiting on the 89 at Kinkaid and N. Aiken and had a few moments to spare before her bus arrived.

Alisha has lived in Garfield for 34 of her 37 years on this earth. When asked about her favorite part of the neighborhood, Alisha stated, “Garfield feels more like a community than just a neighborhood.” When I asked her if she could elaborate, Alisha mentioned that the neighborhood has become more racially diverse in recent years. And she thinks this is a good thing. As also covered in the Garfield Neighborhood Profile, she went on to explain that the majority of White residents fled the neighborhood a few decades back, but that their return for her has been a welcomed one. Implicit in Alisha’s comments is a value placed on diversity and the benefits that such diversity can potentially bring to her and her neighborhood; and on an equally important note, the benefits that Alisha and her neighbors can bring to new comers. Alisha enjoys the fact that her neighborhood is becoming somewhat less segregated.  But when I pondered Alisha’s welcoming comments towards her new White neighbors, I wondered if Alisha would receive the same arms-wide-open welcome in Pittsburgh’s Whitest and equally segregated neighborhoods.

When I asked Alisha about her least favorite part of living in Garfield she said, “There used to be a lot of gang banging, but not so much these days. So there’s nothing I don’t like about Garfield.” For Alisha, the neighborhood feels safer these days and gang activity has decreased. She went on to say that gun violence has been a harsh reality for decades, but as people, investment and commercial activity have returned to her neighborhood so too has some peace of mind. Although Alisha’s comments are hopeful regarding a perceived decline in this type of violence, the neighborhood still suffers from comparatively high degrees of fatal and non fatal gun violence and shootings. From 2012-2017, and according to Public Source, there were 3 incidents of homicide by gun in 2012, 2 in 2013, 5 in 2014, 1 in 2015, 2 in 2016 and 3 in 2017 just from January to mid-august – with Garfield surpassing all other Pittsburgh neighborhoods in the first 6 months of 2017 alone regarding the total of murder by gun, shooting with injury and gun assault with no injury incidents. But as my friend James mentioned to me, perhaps Alisha’s part of the neighborhood has seen significant declines in violence; given that gun violence tends to be carried out by a small number of residents who create a disproportionate amount of that crime and because gun violence also tends to concentrate in micro-sections of high poverty areas like Garfield.

As detailed in the Garfield Neighborhood Profile and the Knoxville Neighborhood Profile, urban sociologists and scholars of urban poverty have found that economic circumstance, durable economic and racial segregation and prolonged in-opportunity, among other structural and systemic variables, are often high predictors of gun related crime in durably high poverty neighborhoods like Knoxville and Garfield.  Researcher Robert Sampson of Harvard found that concentrated poverty had an incredibly strong relationship with high homicide rates (R = 0.96, p <.01) in his book Chicago and the Enduring Neighborhood Effect and also found that high homicide rates in turn predicted higher rates of low birth rate. And despite deep declines in violence from the 1990s onward in American cities, high homicide rates remained concentrated and durable with declines far less steep in slope in neighborhoods of concentrated poverty (pp. 110-114). This is especially troublesome given research regarding the effect of gun related homicides on childhood cognitive development via standardized measures of IQ. Researcher Patrick Sharkey found that the IQ scores of children within 6 to 10 square blocks of a homicide saw their IQ score fall by 7 to 8 points in one study, if the murder happened within a week of their taking the test (and as compared to low poverty kids who didn’t have a murder in their neighborhood). Lastly, when compared to incidents of non-fatal gun violence in nearby Friendship, the difference between gun related violence and shootings in high poverty Garfield and low poverty friendship is one of kind, not degree – as can be seen in graphs below. Data was pulled from Allegheny County Analytics. 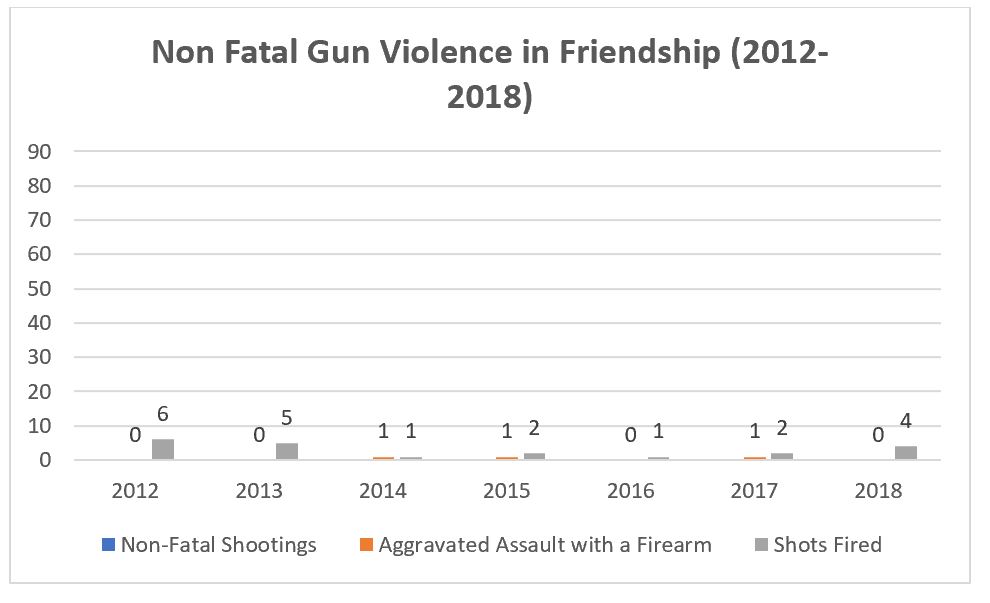 Regarding a shout-out to a favorite institution, restaurant or the like, Alisha was at a loss for words. She said that that’s an area where the neighborhood is lacking and is in need of more diverse kinds of spaces and places where her kids can play. When I asked her specifically about her thoughts regarding the revitalized commercial corridor down on Penn Avenue Alisha said, “The art venues on Penn are interesting, but they don’t do much for me and my kids. My kids aren’t into that. And we don’t have the money to go to those new restaurants that are opening up. We can’t eat art.” For Alisha, while there is a diversity that new artists bring to the neighborhood, not all of the long-term residents of Garfield are into art, or the type of art showing up at the neighborhood’s art gallery crawls on the first Friday of every month. To illustrate the lack of structured space for her kids, Alisha motioned down Kinkaid Street and said that she had to go out and buy her children a basketball hoop so that they have a place to play.

As recently described in the Garfield Neighborhood Profile, Garfield is a neighborhood that has seen significant investments in affordable, moderate and market rate housing development and rehab via The Bloomfield Garfield Corporation and the Garfield Jubilee Association. And it is also home to a number of community groups and youth development programs that aim to connect Garfield youth and young adults to education and in-demand workforce development services. But despite these efforts, the neighborhood suffers from comparatively high rates of extreme poverty, rate of single mothers, rate of males who are unemployed or unattached to the labor force and non-fatal and fatal gun related violence and shootings. As such, and like other durably high poverty neighborhoods in Pittsburgh, Garfield is a complicated place that is attempting to rise beyond the barriers that many of its Black and other long-term residents face. And as someone who lived in Garfield for 2 and half years, I also love this neighborhood, my old neighbors and the proximity that Garfield has to grocery stores, public transit and the rest of the East End. But generational poverty and gun related violence are not easily alleviated through local and well intended community programs alone. It will take additional citywide efforts that compliment what local neighborhood groups are already doing to raise the income of residents, connect long-term residents to living wage opportunities and ultimately address the factors that contribute to the neighborhoods fatal and non-fatal gun violence.

Published by The Pittsburgh Neighborhood Project

The Pittsburgh Neighborhood Project is a street by street exploration of the city’s 90 neighborhoods. As the beauty and uniqueness of each neighborhood is explored so too will the reality of lasting racial and economic segregation, its' causes and its' consequences. I was born and raised in a low-income home in the City of Pittsburgh and am an avid consumer of any research related to poverty, neighborhoods and racial gaps. I currently work for the local government and conduct data analysis, geospatial analysis and research at the intersection of place, affordable housing and program evaluation. I have a Master of Science in Public Policy and Management from the Heinz College of Information Technology and Public Policy at Carnegie Mellon and a Bachelor of Science in Research Psychology with a minor in Philosophy from Wheeling Jesuit University. I love walks. I play in a local emotive indie rock band. And Pittsburgh will always be my first love. *My views are my own and may not represent those of my past or current employers.* View all posts by The Pittsburgh Neighborhood Project